On my patio sits a old bug-eaten, weather-worn, gnarled geranium. No telling how long it has been there, or who planted it. It sits in a small flower box against the back fence. I vow to replace it every time I look at it. This morning, I took a walk around the patio, making a list in my head of the things I want to do when the weather gets better. And, I saw it!!!  Lo and behold, the geranium plant has a bud ready to bloom. What??? That’s me! Weather-worn, gnarled, – maybe not bug-eaten, ready to bloom.  Haha. Well, what can I say? 2017 was a rough year of “recalculating” (as the Garmin would say) – working on “what’s next.” And, while I have been reevaluating these “golden years”, I have continued attending most monthly events of the American Club of the Riviera (ACR), trying to link and connect with expats in town. That’s just about everyone. Kinda like Los Angeles, most people here are from somewhere else.

There is not a lot “American” about the Club. It is international in scope. But, it celebrates Thanksgiving on a Thursday – the middle of a workday for the French, so that counts. Who cares? It’s fun. The people are interesting. Let me be clear, it is not a place one is going to make a lifelong friend, but who cares? At least, I now know a few first names and a couple of last names. Maybe I will make a more concerted effort in the future, but who knows.

These are the things I do know – Steve is not coming back. I like living in France. I speak “some” French.  I am 80 (going on 81).  I have immediate family in California, Colorado, and Georgia. I know how to teach, act, write, and litigate.  I have knee-problems.  There are other things I know, but for now, this list will do.  As far as decisions go, the jury is still out.  Meanwhile, I made a plan – sign up for ACR’s January Event. Show up.  So, on Saturday, January 20, 2018, I went.

The Event was being held at the Manoir de l’Etang, in Mougins, France.  Since Mougins is about a 45-minute drive from my house, I decided to go. Time to explore other communities (and “Manoir Houses”) close by. I’m not that familiar with Mougins, but I know that it  is a community located on the heights of Cannes, in the district of Grasse.  I had read where Mougins has been frequented and inhabited by many artists and celebrities, including Pablo Picasso, Jean Cocteau, Yves Saint Laurent, Christian Dior, Winston Churchill, Catherine Deneuve, Édith Piaf and Jacques Brel, to name but a few.  Picasso spent the last 12 years of his life living in Mougins (1961–1973), where he died. He lived in a ‘mas’ (farmhouse) at Notre-Dame-de-Vie, which is a small hilltop just beside the old village of Mougins and next to the 12th-century chapel of the same name.  Picasso’s studio was in the old village in a building that is now the tourist office. More to explore on another day.

I read where the Manoir house, built in the 19th century, is set in four hectares of land , behind gates, and overlooks a small lake. No problem finding the place. I used Waze. Ever since my granddaughter Jamie told me to use it (I got lost going to meet her in Antibes), I have used Waze. Before that, I used Google maps. Ugh. It slaughters French pronunciations. Waze doesn’t even try. Just gives me orders – turn or prepare to turn. Works like a charm. I seldom get lost. (Knock on wood). Plus, the location was just a few minutes from Exit 42 on the A8. Piece of cake. Drive-through gates at the entrance.

Each time I go to one of these events, I have fun. (Maybe it is because I’m glad to have somewhere to go. Hmmm…, no) As I said before, the attendees come from all over the world.  This was a reception, lunch, and Assemblee Generale. The weather was gorgeous, allowing us to enjoy our aperitif on the outside terrace – champagne and hors d’oeuvres. I even checked my coat at the door!! 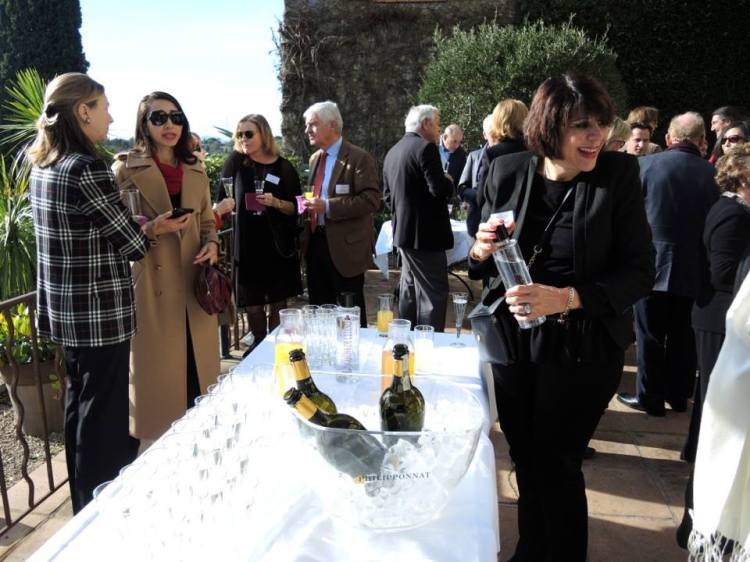 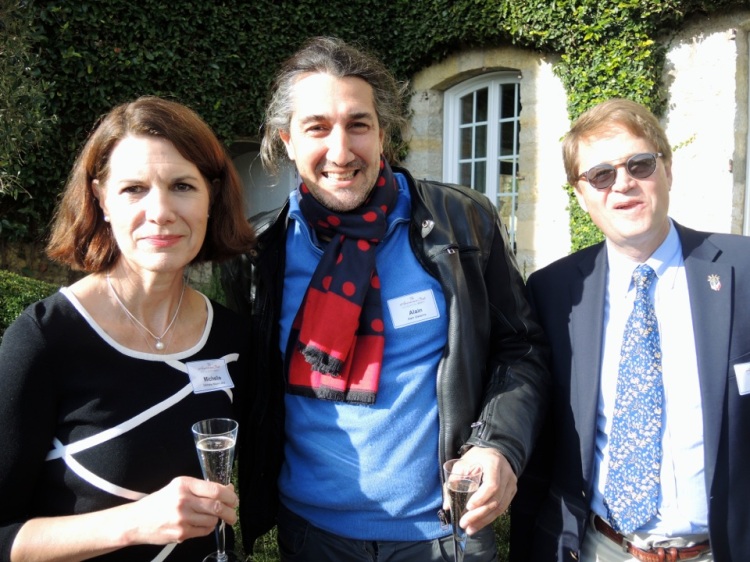 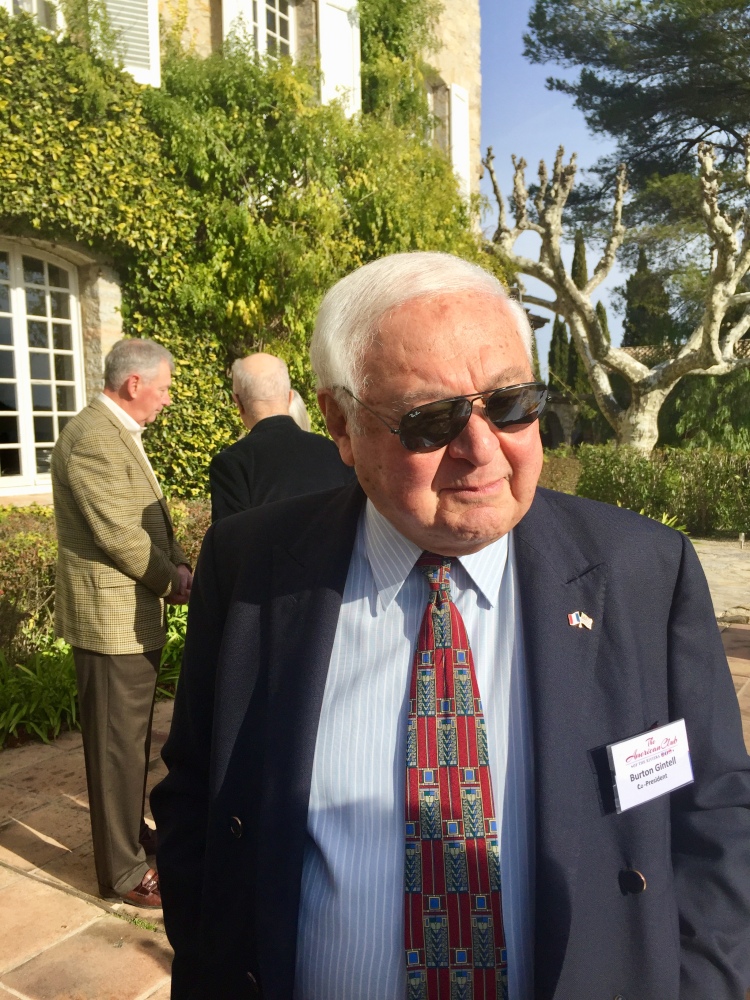 The Reception was followed by the Club’s Annual General Meeting, including the election of 2018 Officers and Governors, on the side porch, overlooking the pool.

We then went inside for a 3-course lunch with wines, waters, and coffee.  Choices:

On the way home, a woman at the luncheon needed a ride back to Nice. Meet Margaret Keith. 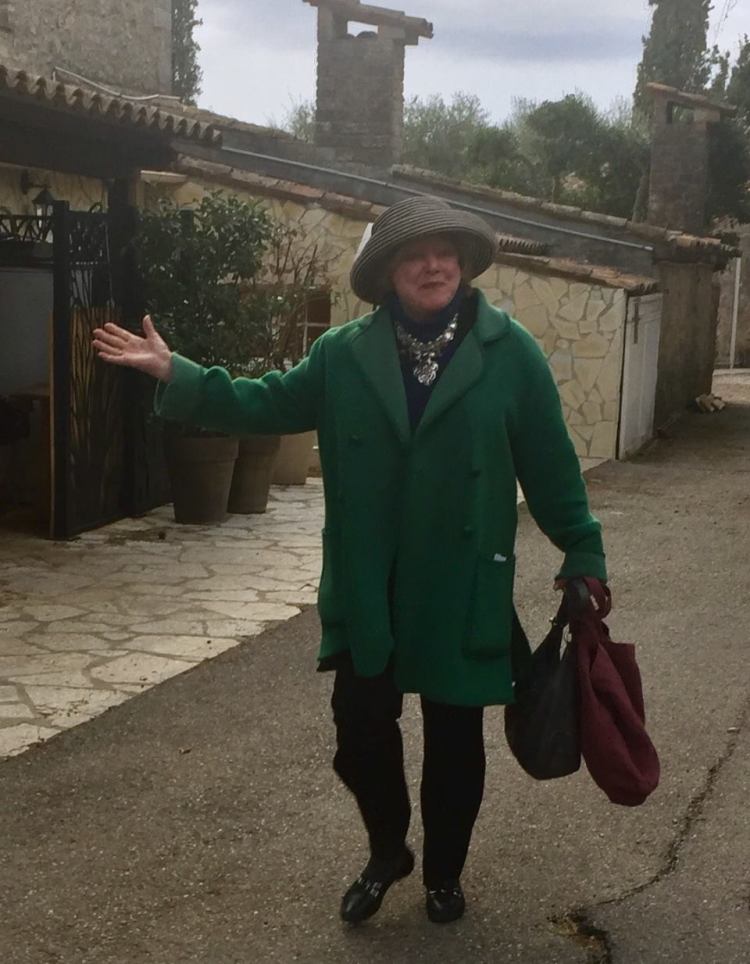 Of course, I said yes to the company. Turns out, she is from Selma, Alabama, lives in Paris, and owns property in Nice. What fun! We gabbed the whole way back to town and vowed to get together for lunch upon her return.  She has lived in Paris for 45 years!! Amazing story.

I talked to the owner of the Manoir House – Camilla.  She has 20 rooms and calls it a “hotel”.  I love the pool. I plan to investigate the rates. Explore the town and read by the pool in a beautiful, quiet setting with good food. That works. 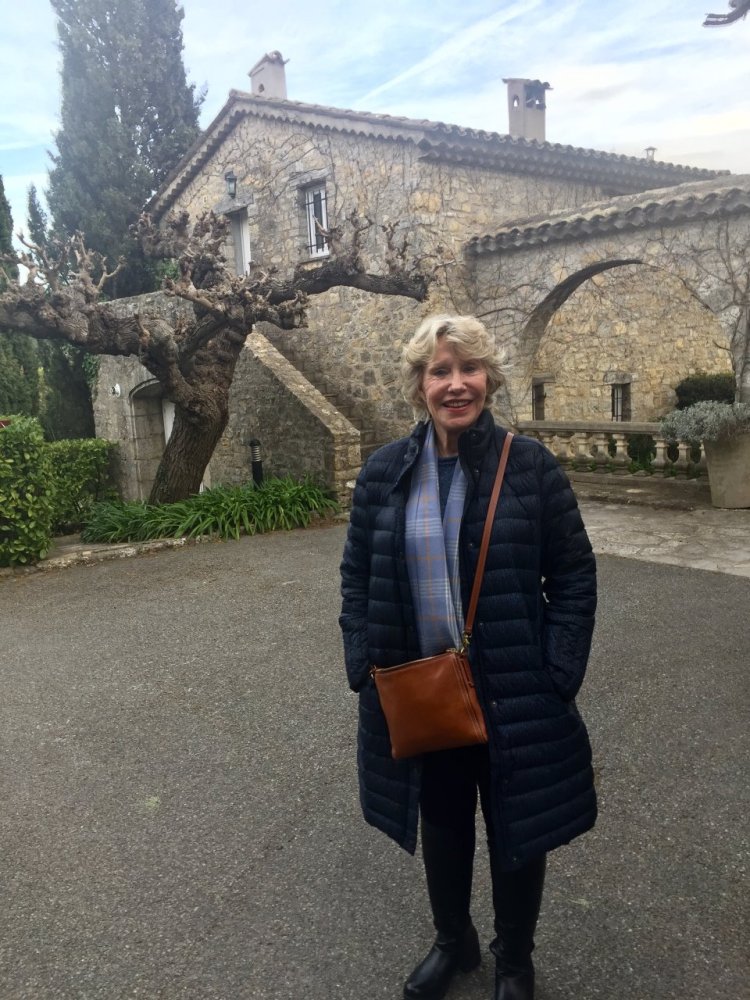