Thanksgiving is over, but the spirit of camaraderie remains.

Knowing this year would be Thanksgiving without Steve, I looked for something to do. Any restaurants in town serving turkey? No. Not that I know of. Then, I saw – The American Club of the Riviera (ACR) was having a Thanksgiving Luncheon at the Café de Paris Monaco.

I checked out the event and decided to go – time to get out of the condo. The Club is large – expats from all over, not just France. I joined. I asked Andrea and Slav to go with me as my guests. They agreed. 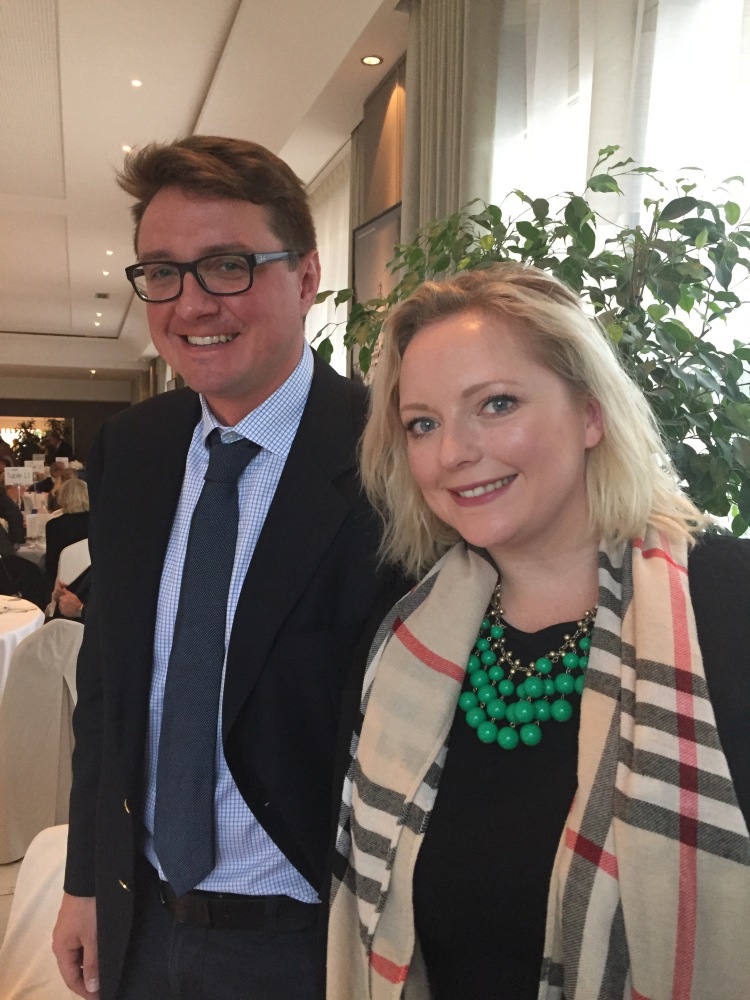 And, in the spirit of that first Thanksgiving [see article by Art Buchwald, below], we three enjoyed a Champagne Reception and Thanksgiving Feast – French-style.

It was fun, networking and meeting people from all over the world. I was introduced and asked to say a few words.

The program was given by several people, mainly representatives from the American Military.

We stood up for three national anthems (U.S., France, and Monaco). 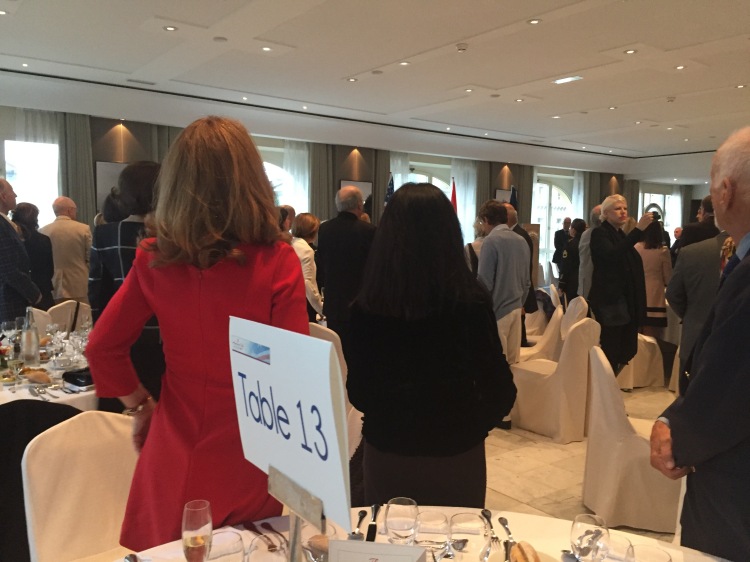 and ate French “turkey” at an event that has always meant a lot to me. A fun time was had by all. Steve would have loved it.

[This confidential column was leaked to me by a high government official in the Plymouth colony on the condition that I not reveal his name.]

One of our most important holidays is Thanksgiving Day, known in France as le Jour de Merci Donnant.

Le Jour de Merci Donnant was first started by a group of Pilgrims (Pelerins) who fled from l’Angleterre before the McCarran Act to found a colony in the New World (le Nouveau Monde) where they could shoot Indians (les Peaux-Rouges) and eat turkey (dinde) to their hearts’ content.

They landed at a place called Plymouth (now a famous voiture Americaine) in a wooden sailing ship called the Mayflower (or Fleur de Mai) in 1620. But, while the Pelerins were killing the dindes, the Peaux-Rouges were killing the Pelerins, and there were several hard winters ahead for both of them. The only way the Peaux-Rouges helped the Pelerins was when they taught them to grow corn (mais). The reason they did this was because they liked corn with their Pelerins.

In 1623, after another harsh year, the Pelerins’ crops were so good that they decided to have a celebration and give thanks because more mais was raised by the Pelerins than Pelerins were killed by Peaux-Rouges.

Every year on the Jour de Merci Donnant, parents tell their children an amusing story about the first celebration. It concerns a brave capitaine named Miles Standish (known in France as Kilometres Deboutish) and a young, shy lieutenant named Jean Alden. Both of them were in love with a flower of Plymouth called Priscilla Mullens (no translation). The vieux capitaine said to the jeune lieutenant:

“Go to the damsel Priscilla (allez tres vite chez Priscilla), the loveliest maiden of Plymouth (la plus jolie demoiselle de Plymouth). Say that a blunt old captain, a man not of words but of action (un vieux Fanfan la Tulipe), offers his hand and his heart, the hand and heart of a soldier. Not in these words, you know, but this, in short, is my meaning. “I am a maker of war (je suis un fabricant de la guerre) and not a maker of phrases. You, bred as a scholar (vous, qui tes pain comme un tudiant), can say it in elegant language, such as you read in your books of the pleadings and wooings of lovers, such as you think best adapted to win the heart of the maiden.”

Although Jean was fit to be tied (convenable tre emballe), friendship prevailed over love and he went to his duty. But instead of using elegant language, he blurted out his mission. Priscilla was muted with amazement and sorrow (rendue muette par l’tonnement et las tristesse).

At length, she exclaimed, interrupting the ominous silence: “If the great captain of Plymouth is so very eager to wed me, why does he not come himself and take the trouble to woo me?” (Ou est-il, le vieux Kilometres ? Pourquoi ne vient-il pas auprès de moi pour tenter sa chance ?)

Jean said that Kilometres Deboutish was very busy and didn’t have time for those things. He staggered on, telling what a wonderful husband Kilometres would make. Finally, Priscilla arched her eyebrows and said in a tremulous voice, “Why don’t you speak for yourself, Jean?” (Chacun a son gout.)

And so, on the fourth Thursday in November, American families sit down at a large table brimming with tasty dishes and, for the only time during the year, eat better than the French do.

No one can deny that le Jour de Merci Donnant is a grande fete and no matter how well fed American families are, they never forget to give thanks to Kilometres Deboutish, who made this great day possible.     – By Art Buchwald,  Thursday, November 24, 2005