I cannot speak for the rest of France, but the French here in Nice have a unique way of doing things. Duh. Each day has been a learning process. Currently, I am focusing on the following:  1) pronouncing French words, especially the ones with an “r” in them; 2) going up and down a LOT of stairs, especially the ones without banisters; 3) walking to and from wherever I am going, especially when I have taken a train or bus; 4) finding parking lots in and around and outside of Nice Center; 5) finding a tuna fish or bacon/lettuce/tomato sandwich in town; and, 6) drinking and/or eating outside in a down jacket, especially when temperature is forty-eight degrees with wind coming off the sea. 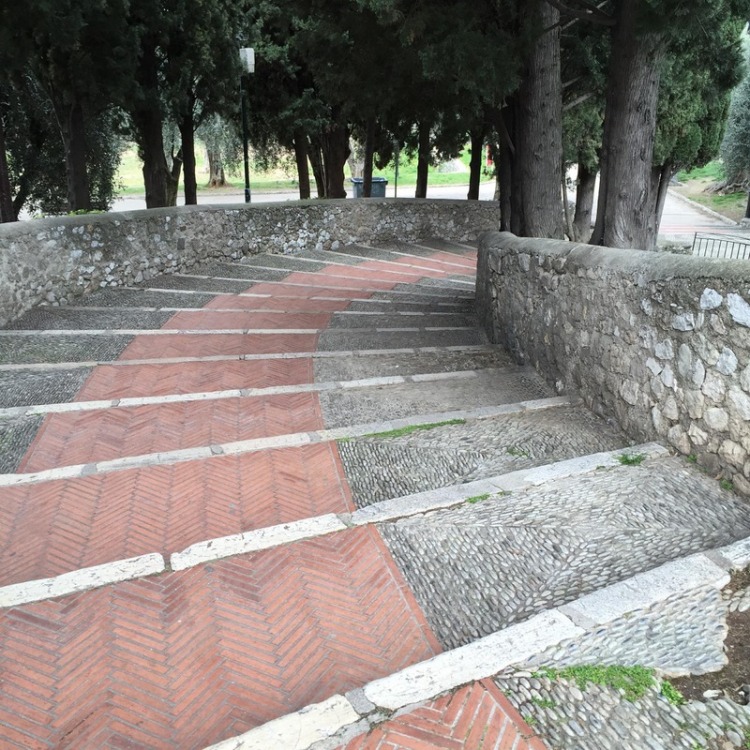 See what I mean?

Take words, for example. I can read the word “important” and instantly know what it means. I can say the word in French, and it sounds like “am por’ tawnh”. If I say it, I know what it means. If a French person says it, I haven’t a clue. And, they speak fast with idioms galore. So, I am back in class, again, studying French for two weeks – making up the two weeks I missed in January, trying to master what I consider one of the most beautiful languages in all the world. This time, it is better!  I’m better! Yes!  Well, during my three-month absence, I practiced. A lot. I listened to the app on my iPhone over and over; I met a French acquaintance for coffee one day a week for several weeks; I asked waiters to speak in French; I ordered food in French; I requested French menus, not English (most restaurants here have both); and I exchanged emails with a French friend in Paris – in French. OK, I used google/translate a lot, but so what. I am making progress – even though it is going slower that I thought it would. I can now carry on a conversation with a French person and understand what he/she is saying – some of the time. Haha.

Reading French is no problem. I can read subtitles, magazines, news articles. I watched “Elle” without subtitles and knew what was going on (excellent film, by the way). I can read letters, advertisements, invoices.

Speaking is different. Pronouncing French words does not come trippingly off my tongue. If I try to say a word with the French “r”, some sound comes out that is foreign to all ears. Please take notice, I am working on it. In class and out.

As far as stairs are concerned, I seldom see an elevator. And, if I do, it takes a while for me to figure out how to use it. Most of the buildings here were up and running prior to that invention. Ugh. And, I never know what floor I need. Is it 1 or 2 or -2, or -5 or 0. Stairs are everywhere – up to the front door, down to the toilette, up to the toilette, up to the dining room, up the hill, down the hill, down to the beach. Hopefully, there is a banister – or, a wall to touch. A wall helps, but it may not be there either. Ugh. Taking the train is a nightmare of steps. Up the stairs to the station, down the stairs to the tunnel to get to the track, and up the stairs to the track. With luggage. That is motivation to fly. (Easy Jet requires you to go down the stairs to get the the bus that takes you to the plane so you can go up the stairs to the door to the plane. Sigh.) Or, take the bus. Or, drive. Or, call Uber. I see people with walkers going up and down the stairs. Amazing. But, if I drive – which I am doing more and more, where do I park? There is no “valet park” around here, at least not at the restaurants. At the hotels, yes. So, I am learning about parking lots in Nice – where they are and where is the entrance and how do I get there and how does it work and is it near where I am going.  Things like that.

Regarding dining al fresco, I have thickened my blood. I’ve had to. The best tables are outside. The shops, Old Town, the Promenade, the Parks, the Med. Weather does not keep the French inside if they can be outside. They throw open the windows, doors, whatever, and heat the outside. The coveted tables are in the sun – summer or winter. Rainy days, not so much, but most days are sunny. COLD, but sunny. All of that changes in the summer, you realize. After all, this IS the south of France.

In conclusion, for the record – it is quite pleasant here. In fact, it’s great. Maybe not everyone’s cup of tea, but it works just fine for me. I wish Steve were here – I want him back.  So, here’s to you, Steve, my love! Thank you for 23 years of wonderful memories. Little did we know. Please take notice, I will love you forever.

One thought on “ADAPTING TO LIFE IN NICE, FRANCE”

I run while I learn (to speak French)