The only way to approach French classes at Alliance françaises (“AF”) is to jump in – feet first. Immerse yourself. Wrap yourself in French, like a seran wrap dress. I originally signed up for two weeks of classes, two hours a day, five days a week. First day there, I knew that would be insufficient. I extended the time: one month, four hours a day. five days a week. No problem, or so I thought. Elizabeth was the professor. Students were from all over the world. First week went OK. Second week, more students joined the class, many of whom gave her a hard time. I was amazed at her patience. They irritated the hell out of me. After two weeks, I was exhausted, sick, cold, irritated, overwhelmed with Christmas grief, and stuck in a quagmire. Well, maybe that is an exaggeration, but I did get the flu. I needed time to get better at living life.

Mid-April, I returned to class. Everything was different. My teacher(s) was/were different. The students were great. The classroom was warm. The coffee was hot. The toilette was clean. My flu was gone. The sun was shining. Life was good. My teacher would be “Emilie” (pronounced “Emily”).

Instead of Emile, “Tara” taught class the first week. I don’t know what Tara does ordinarily (I got the impression that she works in a supervisory position at AF), but for me, she made learning French more fun than I thought possible. Energy galore. AND, the students (from all over the world) were great. Polite, smart, fun. Everyone smiled a lot.

Instead of Tara, “Marlene” showed up Monday of the second week. Apparently, Emilie had returned from vacation sick. And, Tara was unavailable. It didn’t seem to bother anyone that Marlene was teaching another class that day. Somehow, she worked it out. When Emilie did not return on Tuesday, Marlene taught class. Tara reappeared on Wednesday. Marlene finished the week. Sound like a mess? Nope. Everything went smooth as silk. All of us got better. My classmates were the best! By the last day (for me and two others), we were all good friends. Names didn’t matter. Language skills didn’t matter. One day, a group asked me to join them for lunch. That made me happy. I declined.

There were two nuns from India (quiet, demure, studying French for four months), 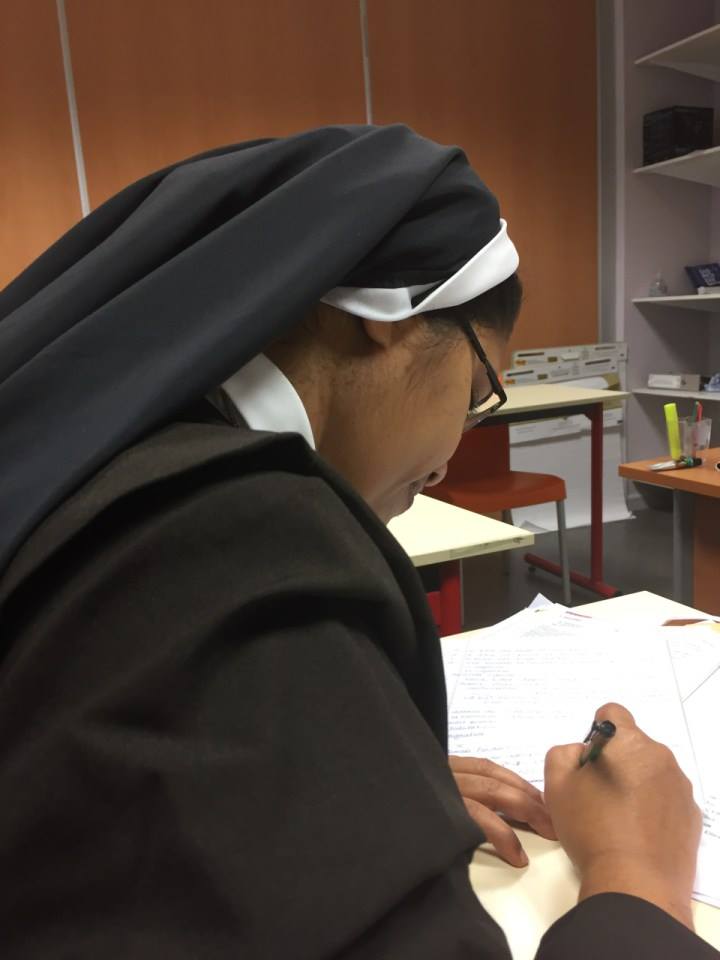 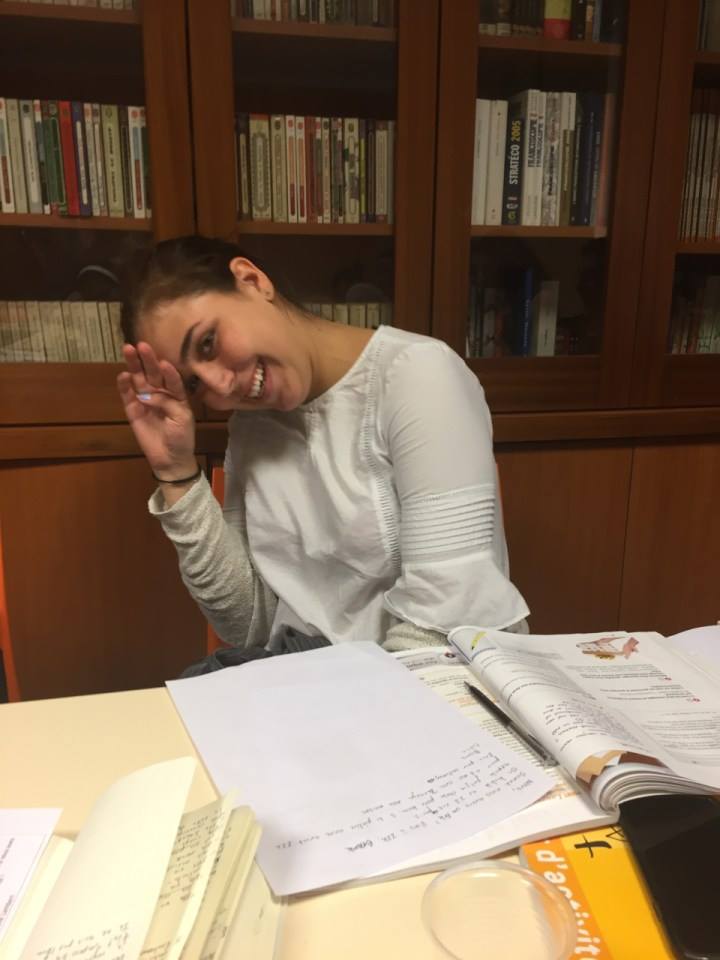 a fun-loving young woman from Libya (fun-loving and friendly with a twinkle in her eye), Luisa from Russia (beautiful, tall, intelligent, and athletic), 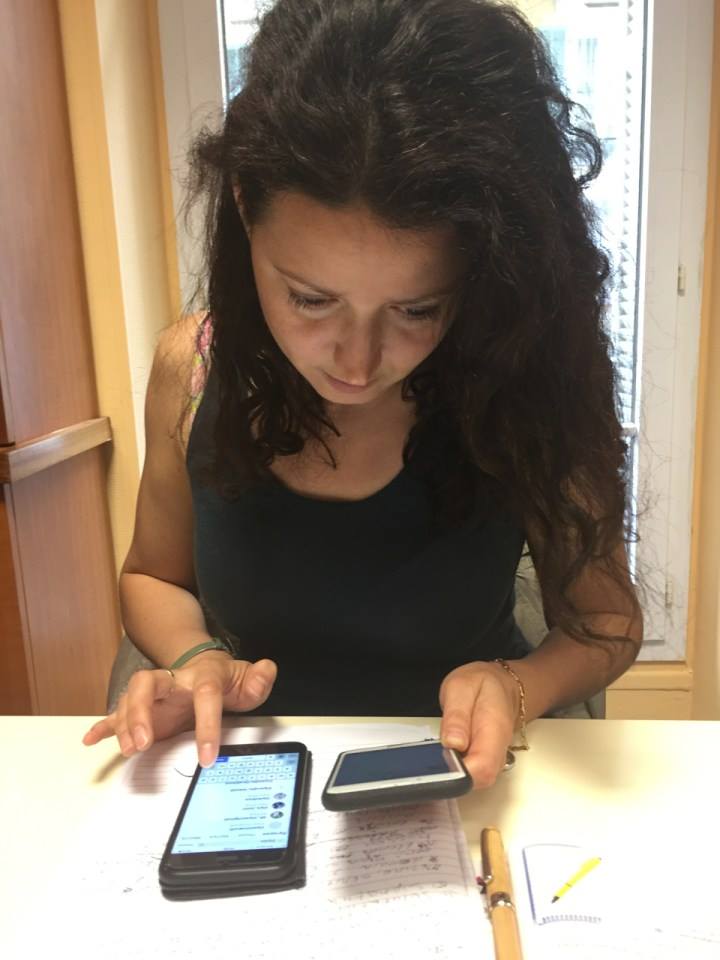 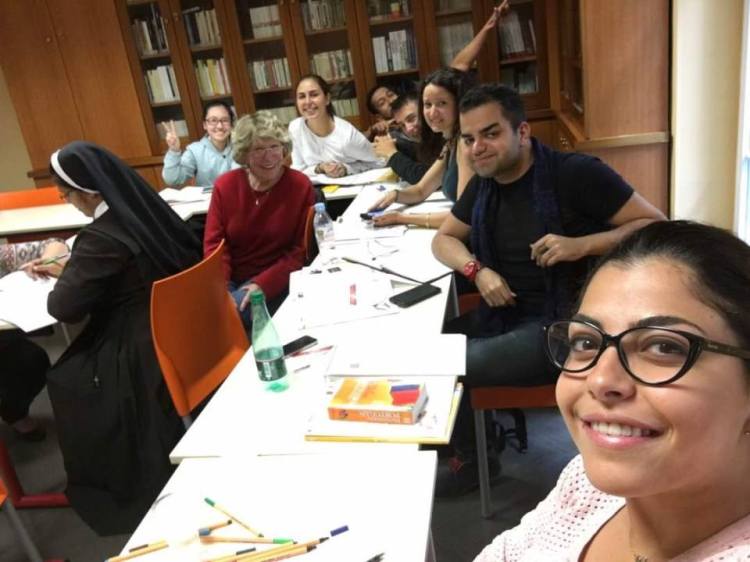 Siavosh from Tehran (a Persian designer and trendy photographer), Peter from the U.S. (an engineer who lives in Nice), two guys from China (intelligent, quiet, and friendly), a girl from China (adorable, quiet, friendly), Catalina from New York (sparkling eyes, warm smile, full of fun), and Sam, from the U.K. (personality galore, a jokester extraordinaire), 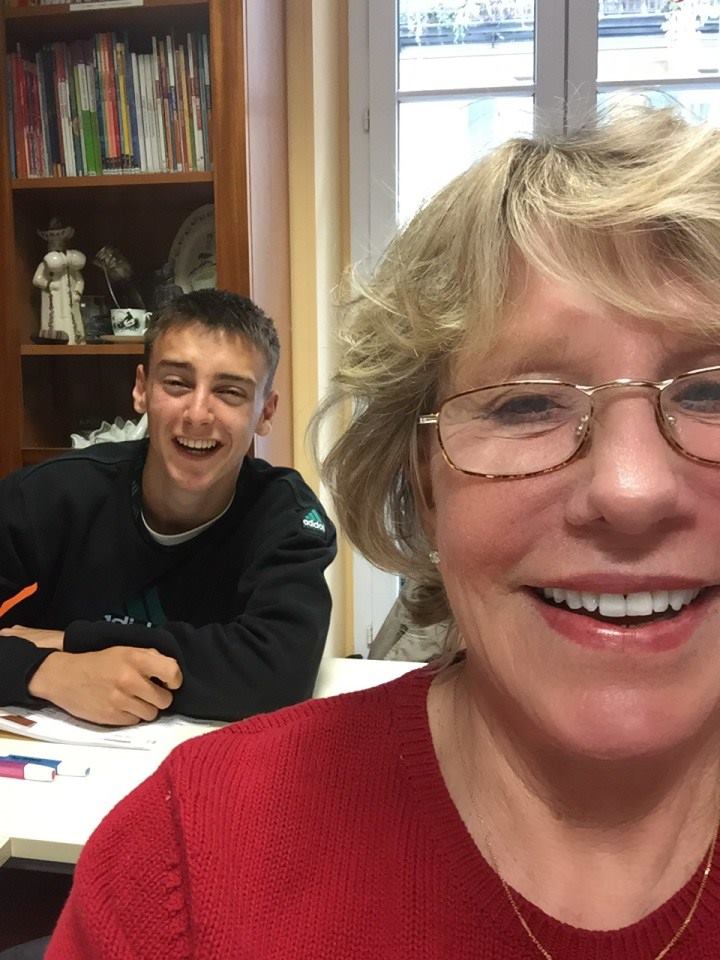 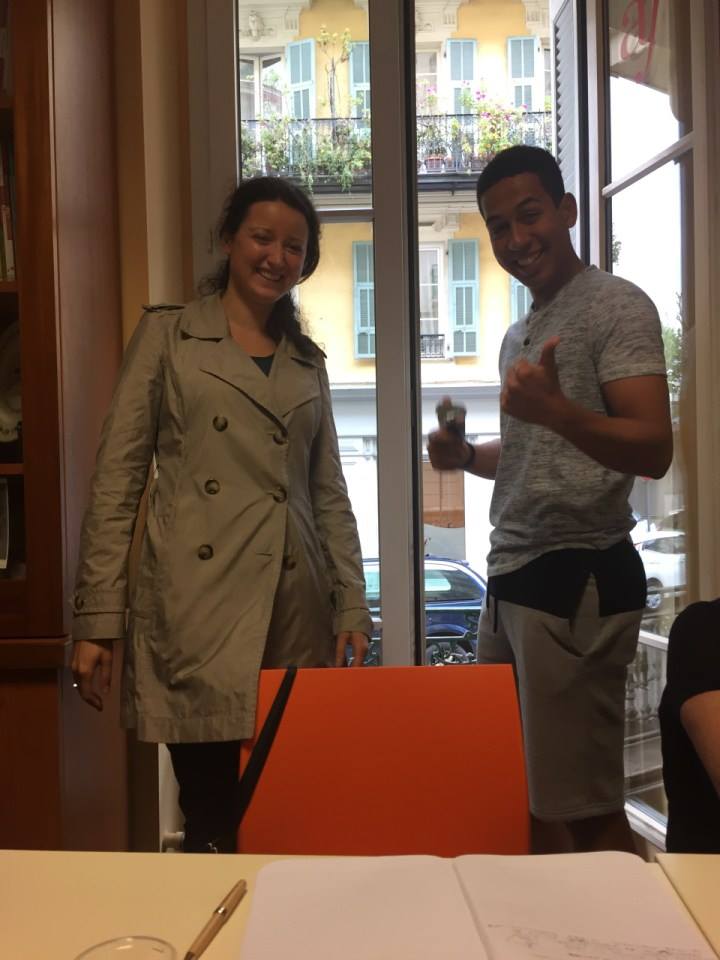 Cristiano from Brazil (great personality with big smile), and a girl – I think her name was Marisa, or something like that from Dubai (breathtakingly beautiful and sick the second week). 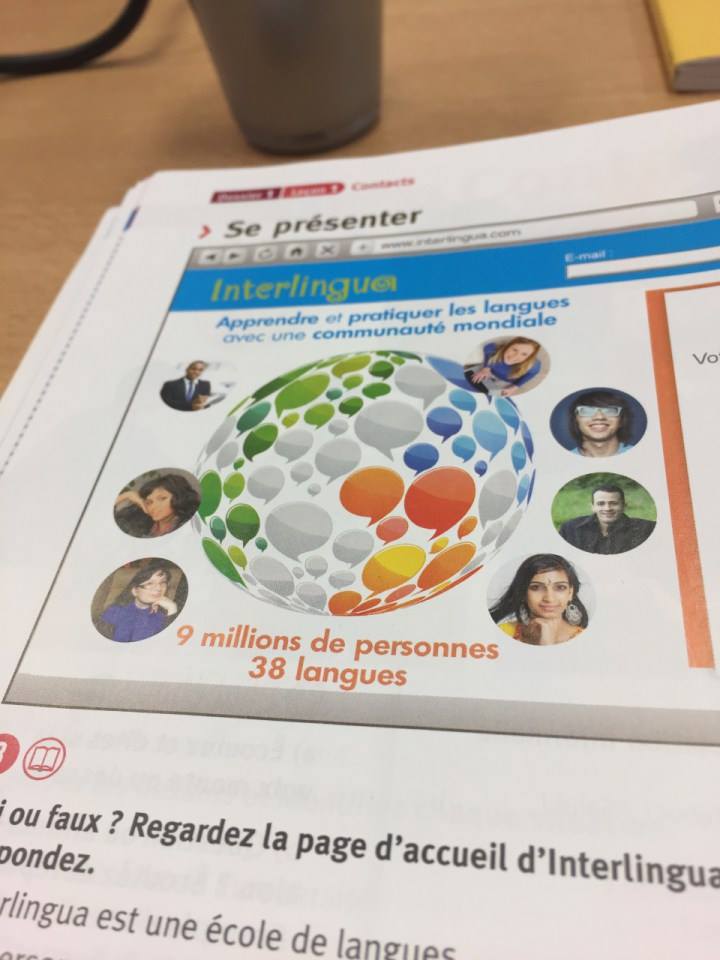 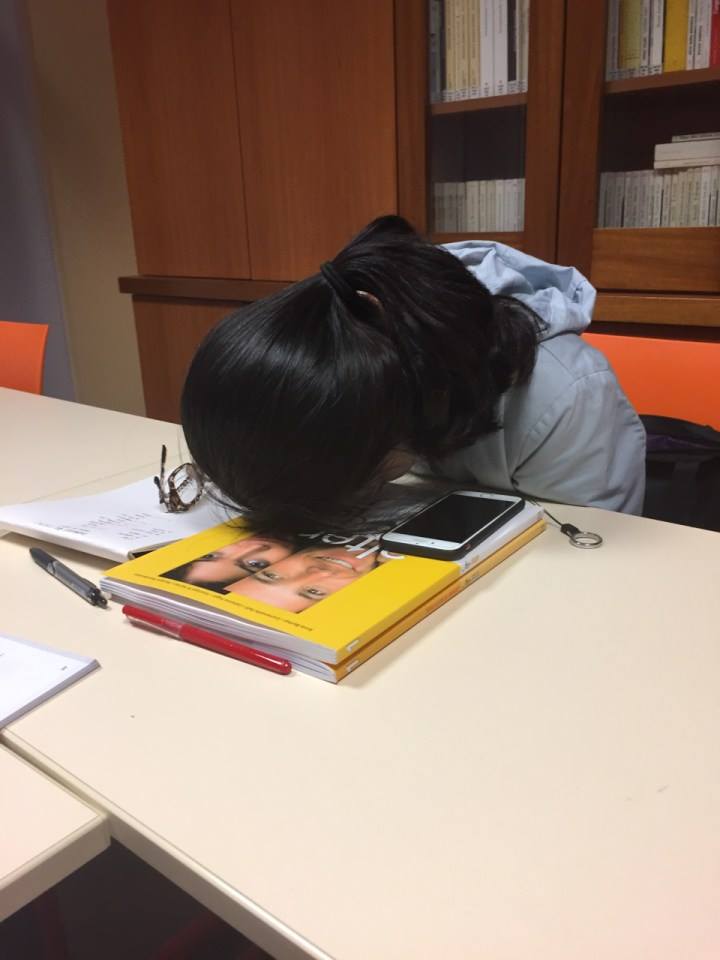 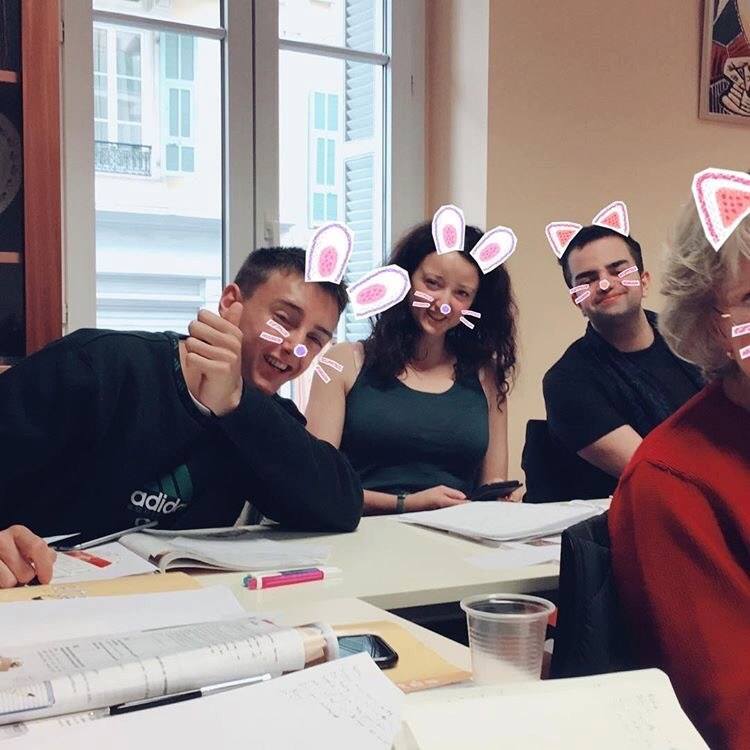 None of us spoke French very well, you realize. Somehow, we communicated. We drew pictures and kept our translation apps handy – Chinese, Indian, Russian, Spanish, English. We gestured a lot. Tara did exaggerated acting demonstrations to explain things. Marlene did, too, but her style was different. She spoke quietly in French without slowing down, assuming we “got it”. We had to speak up if we had questions. Otherwise, it was full-steam ahead. NO ENGLISH ALLOWED. I later discovered Marlene trains AF instructors. She teaches the AF teachers. In fact, AF sends her to other countries to train AF instructors. I don’t know what Tara does, but I would think that she works in a leadership position. Both were outstanding. Great teachers by fluke. I plan to go back – maybe in the fall.

During Thursday of the second week, I took pictures during class. We were working on something that I had finished. Needless to say, it interrupted class. Marlene went with it. She let us have our fun. Lots of laughs. Not everyone is here. The two guys from China are missing, along with several others. But, you get the picture. 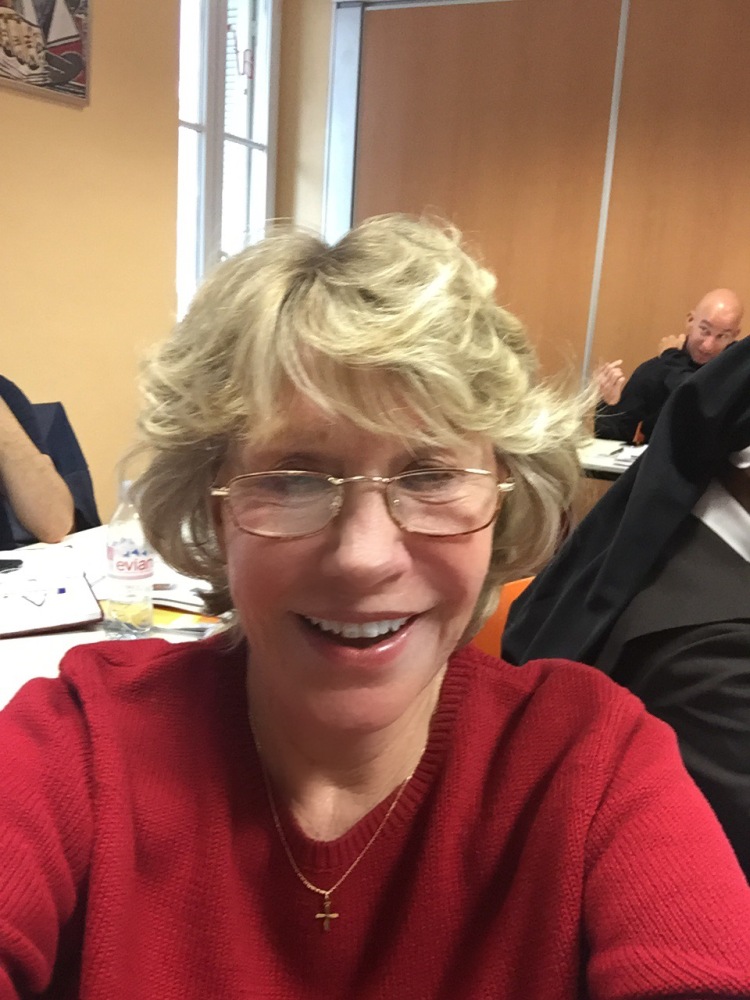