In  my Universal Bubble here, I am into my third week of recovery at La Serena Convalescence Center here in Nice, France, after my second knee replacement surgery, on June 27, 2019. A bit of background to connect the dots (Remember Connecting the dots when you were a child?)  I had a knee replacement on September 27, 2018, because I had lost most of the cartilage in my right knee and was having difficulty walking, especially going up and down steps.  (My left knee also has problems, but it is better than my right.)  My general practitioner referred me to Dr. Olivier Castillo, telling me he was an excellent Orthopaedic Surgeon. I liked Dr. Castillo and got the shots in both knees in January 2017 and 2018.  It helped but I still had problems. So, I made the decision to have the knee replacement surgery in September 2018, which I did.  It was very expensive for me.

Nothing seemed to be going right.  Lots of pain and limping.  My right knee turned out and my right leg seemed shorter than my left.  It got worse.  Well-meaning friends would scold me for limping and encourage me to walk more.  Every time I saw Dr. Castillo, I complained about the limp and the pain.  And, he would scold me for not walking more and tell me to drop the cane and walk at least 40 minutes EVERY day.  He would test my ability to flex my knee. I had excellent flexibility.  He would exclaim, “SUPER”.  Dictate something in French into his computer, and tell me to come back in a month and charge me. 55 euros for the visit.  Needless to say, I was discouraged.  I could not walk without a cane.  And, I had a limp and lots of pain.

Before my six month checkup, I had to get X-rays.  When, I got them, I was shocked to see that I was right – the knees had very different numbers. No wonder I had a limp.  I showed the x-rays to friends and ALL of them encouraged me to get a second opinion.  I decided to see Dr. Castillo for my six-month checkup in March 2019 before doing so (getting a second opinion), and he looked at my x-rays.  I told him I could not walk without a cane and had a lot of pain.  He asked me to flex.  I could flex.  No problem. I just could NOT walk.  That is when Dr. Castillo made a choice.  To address the problem or to sweep it under the table. In my opinion, he made the wrong  choice.  He swept it under the table by ignoring it as a problem. He exclaimed, “SUPER!”  Told me to take something for my pain and that he would see me in six months.

I left his office, made an appointment to see my general practitioner, got a referral to see Dr. Alain Mandrino, an expert’s expert, (the referral is a requirement in France for it to be covered by the French Medical Plan), made an appointment with Dr. Mandrino for late April 2019. He did not have an opening for almost 4 weeks.  When I finally saw him, he looked at the same x-rays that Dr. Castillo had seen.  He got a measuring instrument of some sort.  Wrote down something and turned to me.  He said words to the effect, “your knees are 13 degrees off.  The prothesis is incorrect for a woman of your age and is doing damage to your leg every time you walk on it.  It must be replaced as soon as possible. ”  I set a date for late June (June 27) because my son and daughter-in-law were coming to Nice in June. I wanted to be able to get around while they were here.

Craig and Jean came in June.  I was able to do a few things with them. And, I had a two-hour surgery on June 27, with Dr. Mandrino.  He repaired and replaced my right knee Prothesis.  After the surgery, he explained to me what had happened and showed me the x-rays taken by the Hospital just before the surgery.  So, I had before and after x-rays.  There it was!  Clear as a bell.  The wrong prothesis had pushed bone out of place, turned my leg to the right, and was damaging my entire body as I tried to compensate in order to move.  It would not fix itself.  It would get worse over time.  I WAS PERMANENTLY LAME.  I am still trying to process this unfortunate happenstance of events. 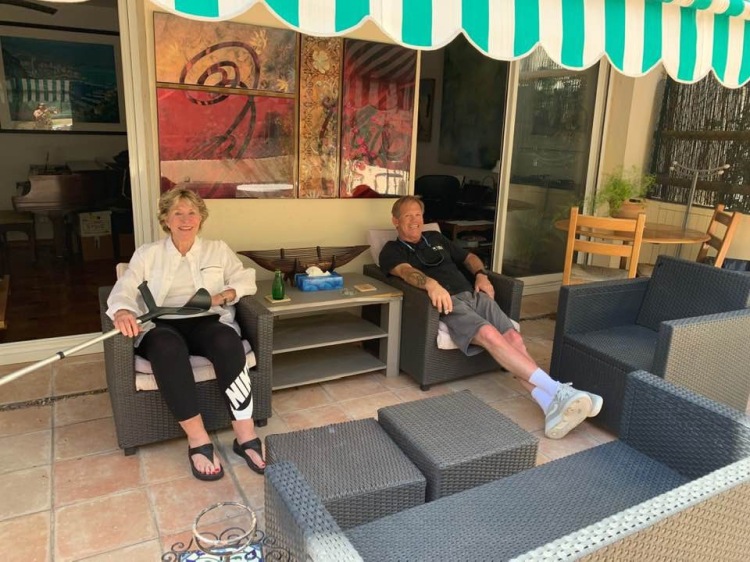 All of this has been very expensive.  I do not have this kind of money.  And, as an attorney, my first thought has been to sue.  But, French law is completely unknown to me.  So, I will give this time and attention after I get better and try to figure out finances.  Do French attorneys do work on a contingency?  I hope so.  And, as Paul Harvey would say, “And now, you know the rest of the story!!”  (Remember Paul Harvey?  Am I dating myself?  So?)

I cannot say enough good things about La Serena Convalescence Center.  This is my second time here.  I don’t know what happened, but last time, it was terrible.  Now, it is terrific.  It could be that I have changed, but it also seems like the Center has made improvements.  I was here in October 2018, and I was miserable. the staff was unpleasant, and the food was terrible.  I did not like my surgeon or my therapist.  I had daily disputes with many of the nurses and a run-in with the head nurse.  One thing- the Room with a View was great.  Other than that, I would rate it  C-  .

This time, I rate it A+ .  The Room with a View is still great (different room).  The staff is friendly; the room is air-conditioned with a patio and a view, AND the food is excellent.  Frankly, I think they have a new director, new Staff doctors and a different dietician.  Now, granted, it could be that I have changed and have become more “French” so I have different expectations.  But, I think it is more than that.  Plus, last time, I did not like my surgeon.  This time, I have a different surgeon.  Last time, I did not like my physical therapist – arrogant man with an attitude.  Ugh.  This time, I like my therapist.  She seems to know what she is doing.  So, a lot depends on the luck of the draw.  Or, maybe it is the respect for the referring surgeon – his office makes all of the reservations for their patients. Ugh. Talk about lack of control.  Doctors have a lot of power in France.  Maybe they have a lot of power in the U.S.  But, here, it seems different. In the States, I have a better feel for things.  I am in a learning curve, here.  Slowly but surely. 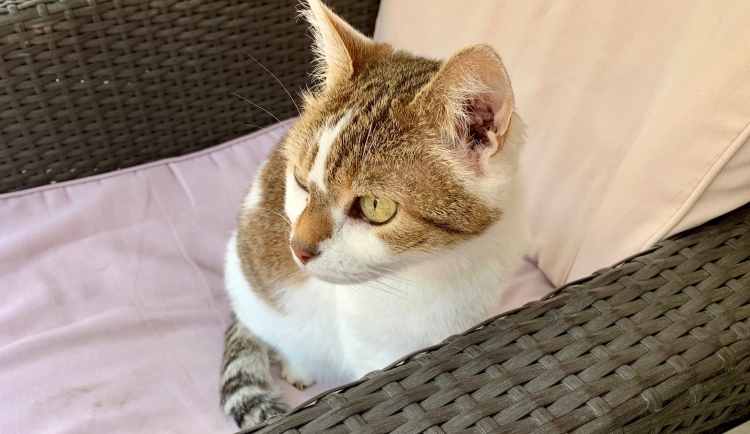 I miss my patio and my refrigerator. I don’t miss the heat and grocery shopping.  But, all that said, I will probably go home as soon as the stitches are out.  Why?  Because I want to.  And once I get home, I will try to remember how to walk – again!!  Without a cane.  At least, 40 minutes every day!!  Find a good therapist.  Or use the one I used before.  I sort of like her.  Not great. Not terrible.  She could not help me.  My problem before, as it was, was not fixable as it was. It is now fixed!!  My legs match!! I can walk (slowly) without a cane!!

So, now on to what is next.  First, lots of patience working with myself and relearning how to do the basics – walk, go out at night, go up and down steps, wear sandals, grocery shop. We are reinventing the wheel here.  Going full circle.   Then, once I can do basics (hopefully, six months or so), focus on moving to Paris. That is where I always wanted to be, since Day 1.  Now, everyone here (in Nice), says, “Why Paris?  The weather is terrible; the city has changed; you will be sorry.

Well, when I moved to Los Angeles from Gainesville, Georgia, I did not love Los Angeles.  The weather was/is nice but far from perfect.  The city was a mess with lots of smog  (1968).  The country was a mess, what with the flower children, drugs, and the Viet Nam War.  I did not go there because I “liked” it.  I went there because it had what I needed – I needed to get my PhD in Theatre History and I had been accepted by UCLA graduate school (one of the few graduate schools  in the U.S. that had a PhD in Drama (Theatre History)) at that time. And, I held a teaching position in a branch of the University of Georgia that was a PhD position. I had to have a Ph.D.   Also, I had secret aspirations of becoming an actress in professional film and television.  I could either go to Los Angeles or New York.  Mother did not want me moving her grandchildren to New York.  It wasn’t “safe” there.  As if Los Angeles were safe.  Haha.  NOT!!  So, I moved to Los Angeles.

Why Paris?  … because it has what I need.  I LOVE Nice.  Nice was Steve’s love.  Paris has always been mine.   Let’s face it.  I am in the final years of my life.  I cannot waste time.  I still want to see, to learn, to meet people, to explore.  I NEED to engage in life more before I engage in death.  Steve’s unexpected death knocked the wind out of my sails.  That, and two knee surgeries because of incompetence.  But, it has now been four years, three years since his death.  That is long enough to be in a rut.  Time to make hay while the sun shines.  Or something like that.  I and my “mixed metaphors”.  As Daddy would say, “Rough seas make good sailors.”  So, while we are reinventing the wheel and going full circle here, except for unforeseen circumstances, Paris is next!!! For better or for worse.  Stay tuned……

P.S.  I have more pictures that I have tried to upload, but something is going on with WordPress.  It won’t accept the uploads. (sigh) 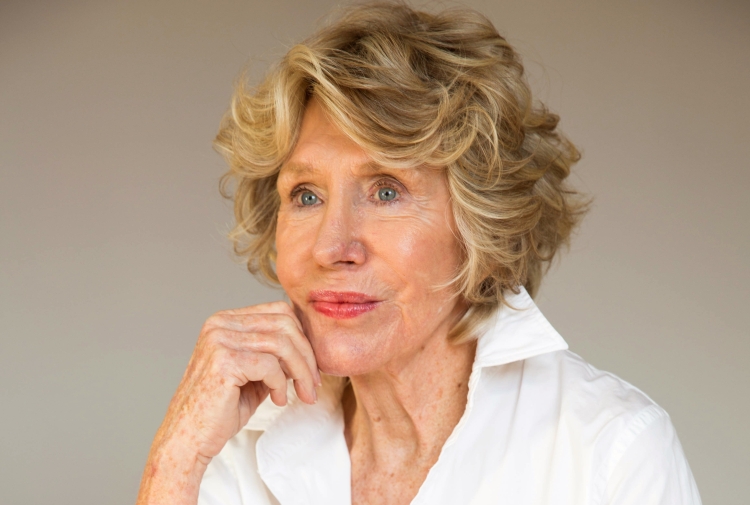