The aphorism that I am pondering this week is this one: “One creates from nothing. If you try to create from something, you’re just changing something. So, in order to create something, you first have to be able to create nothing.”  Say what?  How can you create nothing?  There is always something.  Take the French and Francophiles in Nice, for example. They are very creative.  They take the Sea.  They add a lot of rocks.  And, somebody built a bunch of kitchens and bathrooms into retaining walls.  Haha. That’s creative.  This is what happens – as best I know at this point in time.

In the winter, there is the beach, the Sea, and the retaining walls with access stairs.  Now, I don’t know whether the kitchens, bars, and toilettes are permanent or temporary.  I have not gotten that far in my research.  Haha.  And, as far as you can see, there is nothing. Well, that’s not true. There are a LOT of rocks and a gorgeous sea. Witness what I mean. 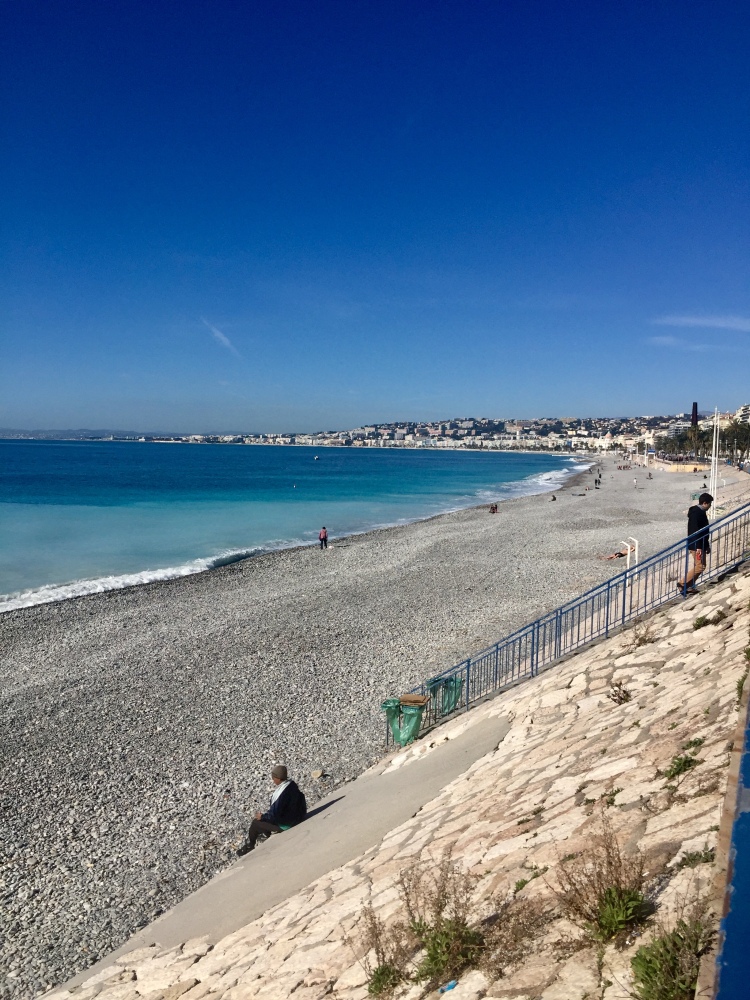 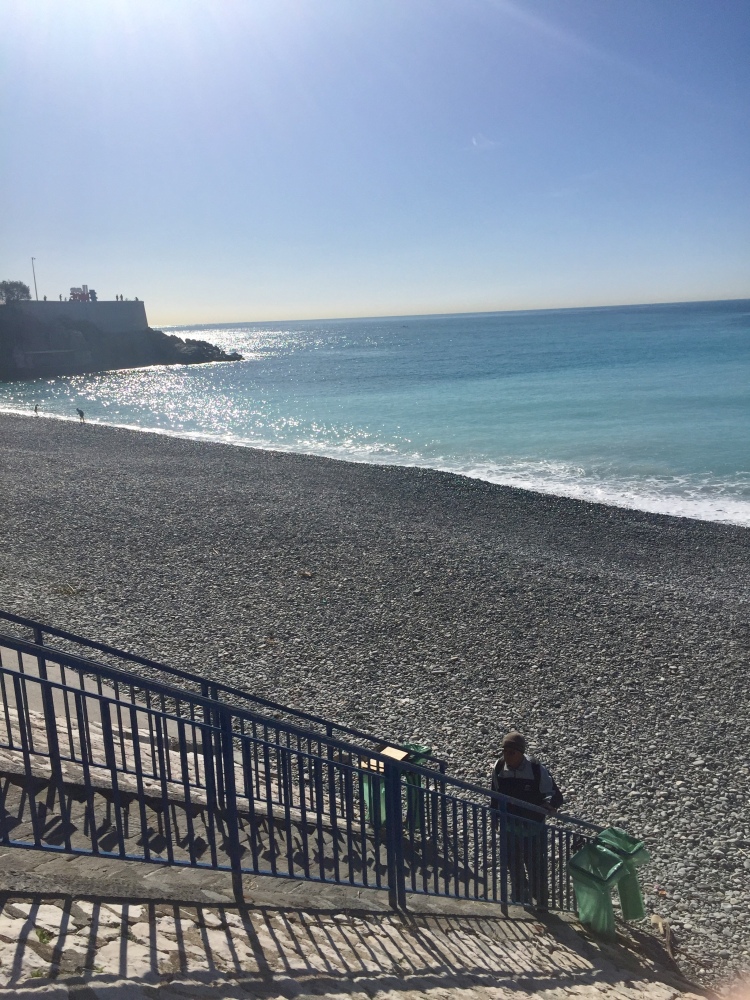 In the summer, that all changes.  Gorgeous restaurants – one after another – are everywhere.  Beach chairs and umbrellas are on the rocks.  Wow.  That’s creating something from nothing. But, there was something – rocks, sea, walls.  So, I guess theoretically speaking, that is not “creativity”, according to this aphorism. To me, it is so creative, I am constantly amazed at how they transform a bunch of rocks into a fine dining experience.  Haha.

Below are pictures of a restaurant on the beach, called “Castel Plage & Restaurant“.  I was at Castel last summer.  The American Club of the Riviera held its 4th of July celebration there.  A stage, performances, dancing, elegant dining.  Amazing. 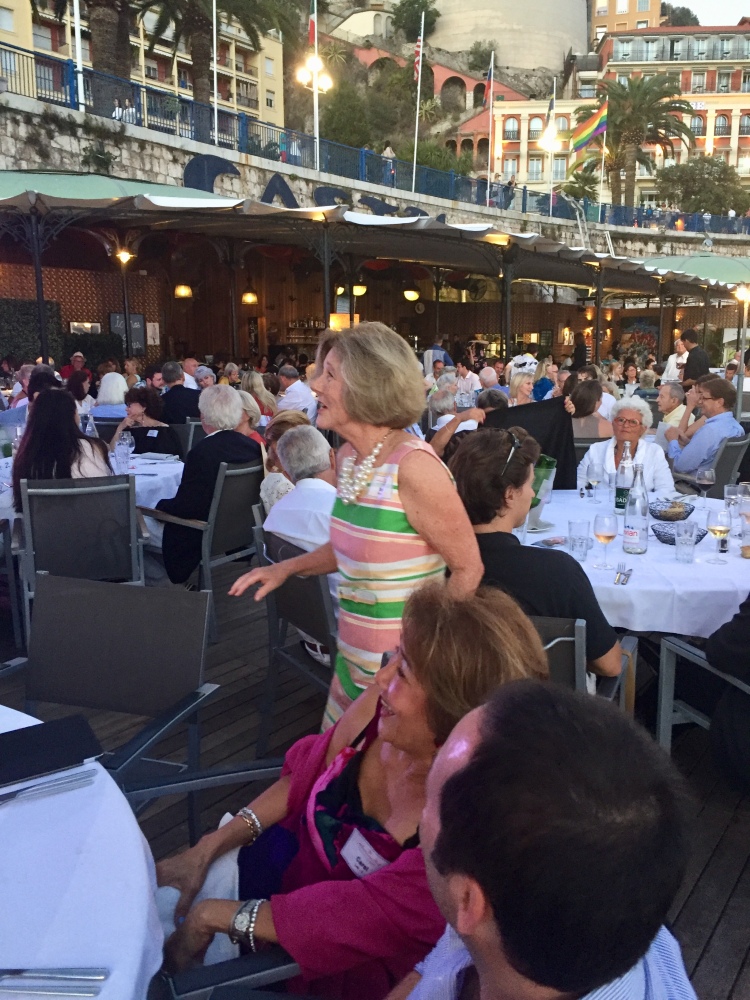 Wednesday morning – when I was walking by the Sea, I saw the beginning of the process.  A-ha!  As I rounded the bend, past the “I Love Nice” sign (touristy – ugh), I saw a bulldozer moving rocks around, clearing a concrete area at the foot of the steps by the sign – “Castel”. 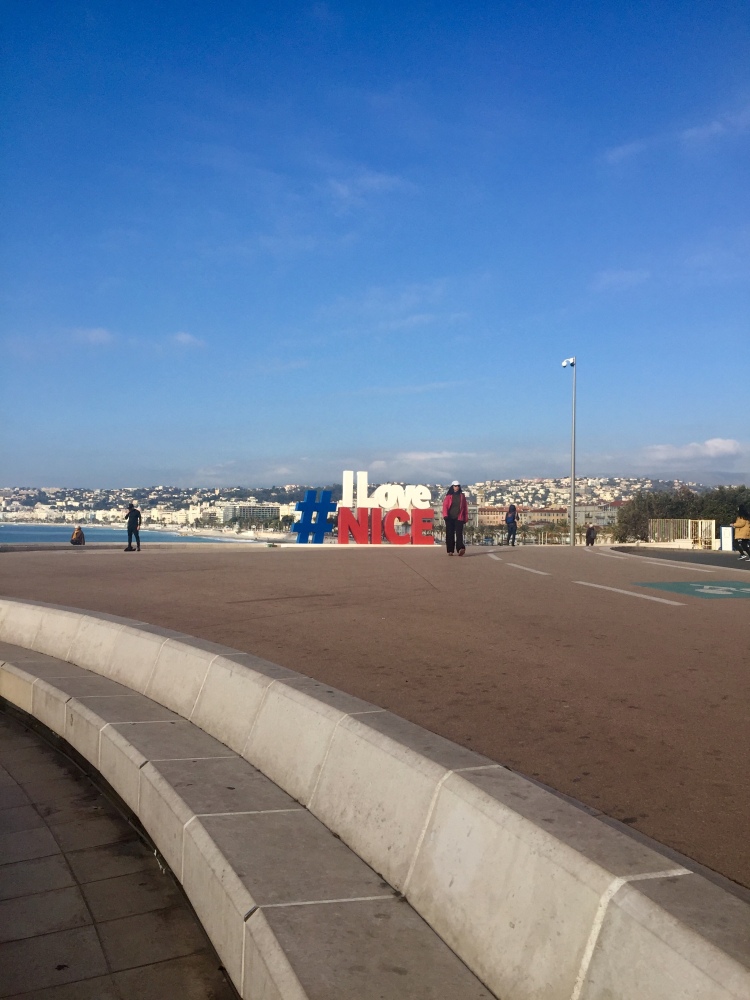 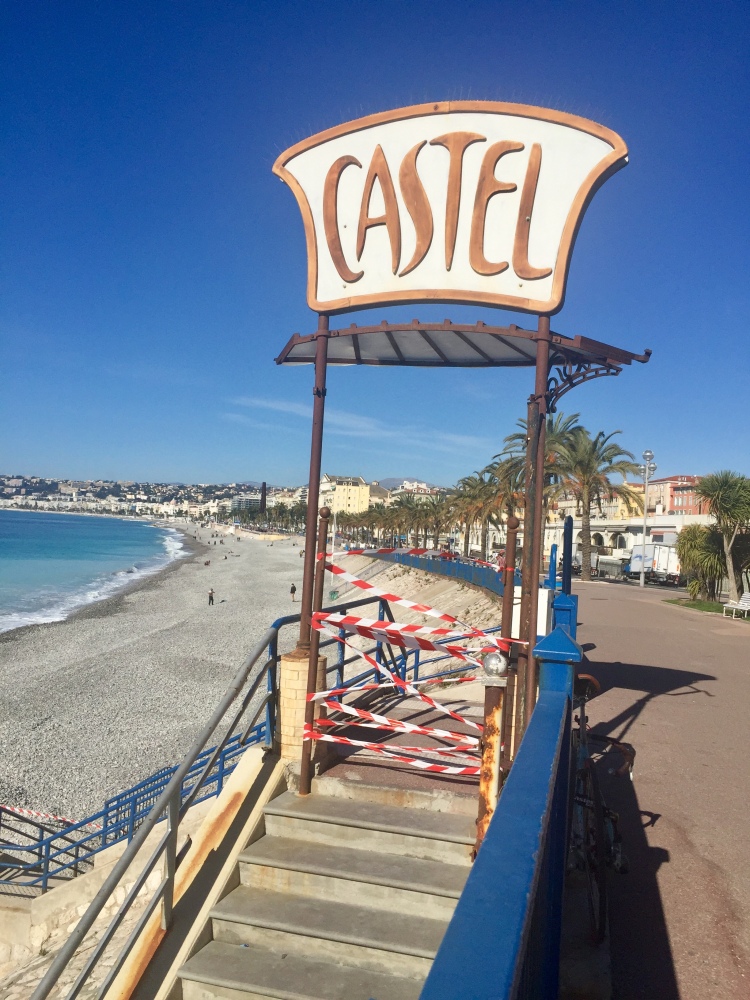 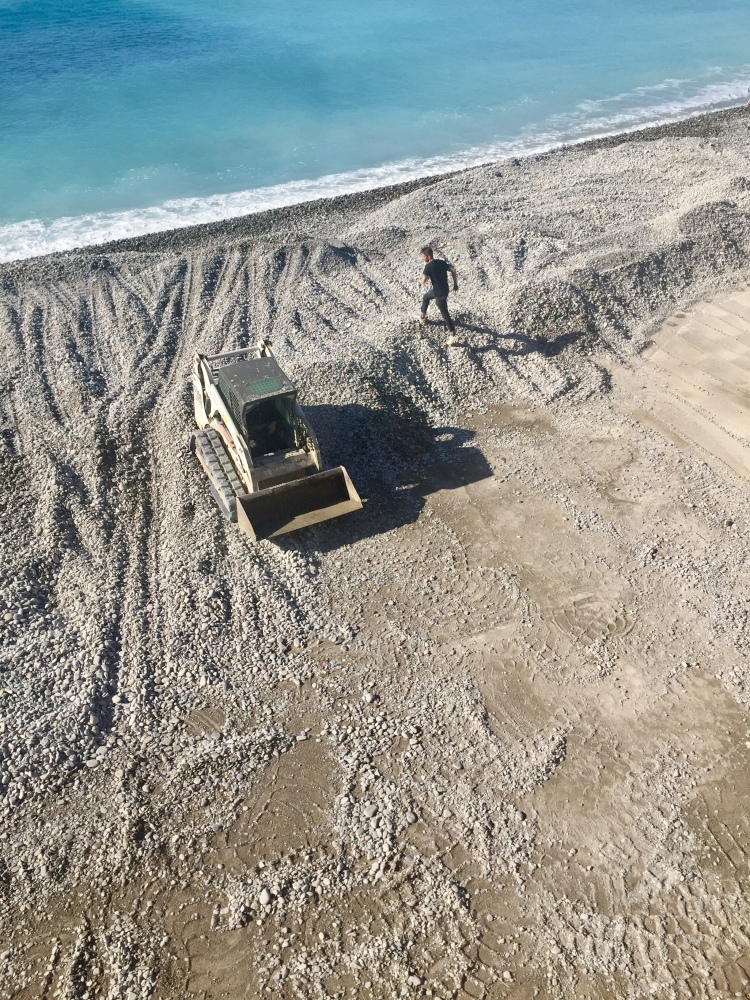 On Friday noon, when I was again walking by the Sea, I say more signs of beginnings. I think this was beginnings of the Lido Plage Restaurant, but I am not sure.  I guess March is the month to commence proceedings. It is still cold with a lot of rainy days, but Spring starts next week!!  If you build it, they will come.   Or, something like that.

My favorites are Beau Rivage and Le Galet.  I go to those more than others because they are closest to me.  There are others I plan to try, especially Lido.  Great places to take company and meet friends for lunch.  Good food, not too pricy, great ambiance – if you like the Sea. 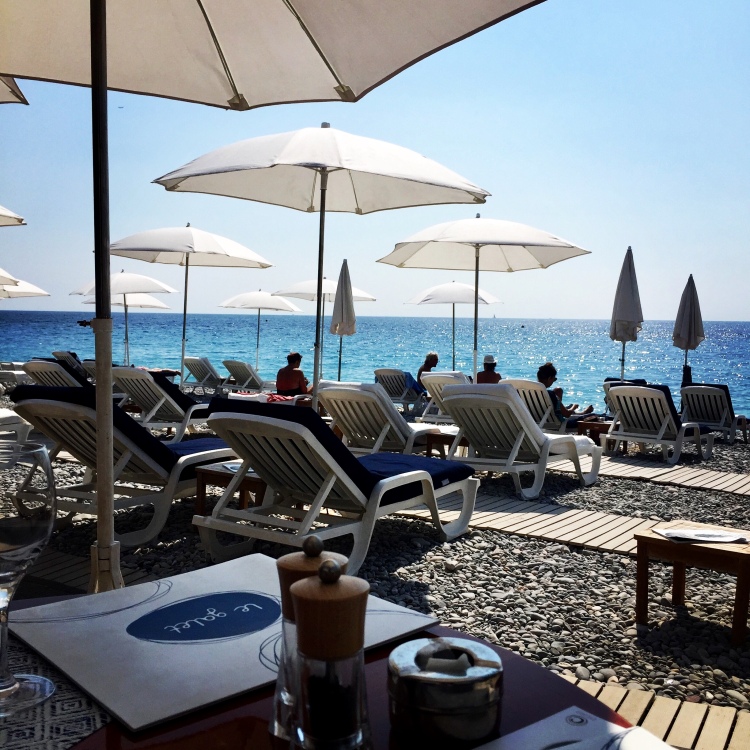 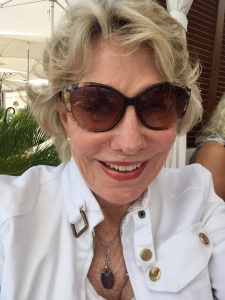 Andrea and Slav had their wedding at Plage Restaurant Delibo in Villefranche-sur-Mer. 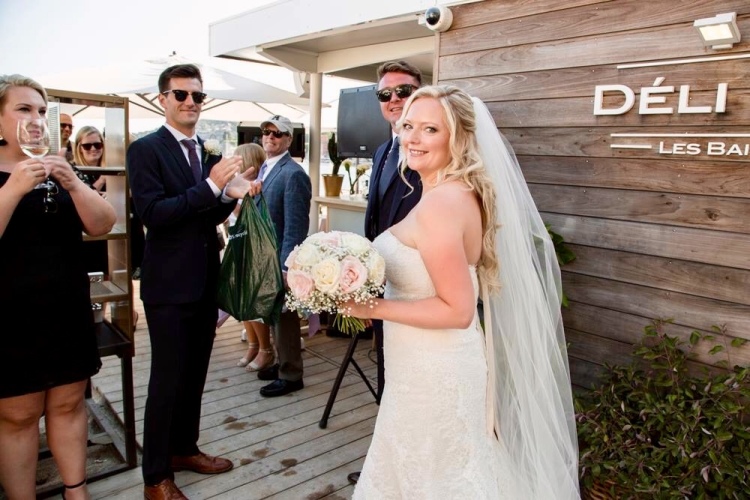 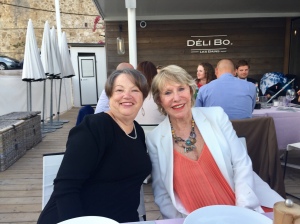 The American Club has held other events at beach restaurants in Cannes. My granddaughter Jamie and I went to the Cannes Film Festival luncheon last May when she was visiting – at the lovely Carlton Beach Club Restaurant 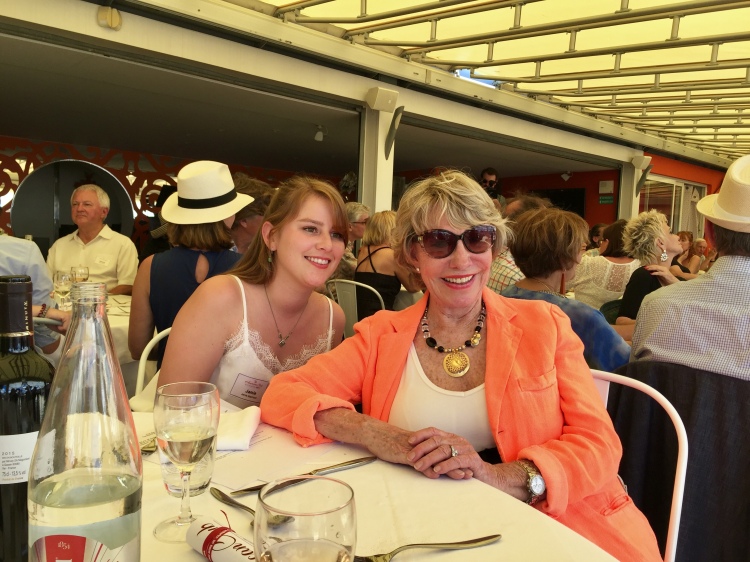 Then, my friend Barbara Marcus and I went to the AMC Dinner and the fireworks concert at the 3.14 Beach Restaurant on the Croisette when she was here last August.

Well, you get the picture.  Probably more pictures than you ever wanted to see.  Yeah, d’accord.  Creating something from something makes more sense to me than creating nothing.   Oh, brother.  Makes my head dizzy.  Peace.