For as long as I can remember, I have thought to myself, I will figure this out! And, I would figure whatever it was – out, no matter the consequence.  I did not think there existed many situations or problems that I could not figure out some kind of solution.  Resourceful?  Maybe.  Maybe foolhardy.  Most of the time, my solution would be to tell the truth when those beside me would be lying, no matter the consequences. And I would get in trouble, NOT the liars!!!    And, I am still doing that – to this day!!!  You would think that by now, I would learn to lie.  Haha.  Nope, still telling the truth and thinking “I will figure this out.”

This move to Paris has not gone smoothly.  It did at first.  Then, it blew up in my face.  It did not have to be this difficult. What do I mean? More communication would have helped. The WIFI did not work.  The electricity was not handled properly and was needlessly was turned off on Saturday night at midnight in 42-degree weather in an all-electric apartment with an almost dead iPhone (that needed charging  ).   There was literally no empty drawer for ANY of my things.  The cat was terrified.  So was I.   What was my response to No WIFI, no power, no food, no nothing? (Each one has a story of what had happened.) “Calm down.  We will figure this out.”  I did not know anyone to call for help, much less speak the language required.   That is when I thought, “I am flying without a net.”  Get a grip!

I got a grip. Early morning, I rented a hotel room across the street.  I needed heat (to get warm) and to get electricity (to charge my phone.  I needed to think.  Plus, it was Sunday.  No one was doing much of anything but dining, if that.  It was raining. One by one, I began to figure things out.   I bought 2 candles and bought matches.  I charged my iPhone and used hotspot for the internet.  I – one by one – started emptying drawers (EVERY SPACE WAS FILLED WITH SOMETHING) and boxing up that stuff to make room for me – for my clothes and other small items.  I got an area in the kitchen and in the bathroom so that I could use them.  Each day, I did as much as I could to move forward.  I was exhausted and on overload, but it worked.  I called one of the Paris movers and ask for help on Thursday morning moving things into a cellar.  I got my “office” up and running.  I went to the grocery store. I ate one meal a day.  I introduced myself to a neighbor and the mailman.  I put my name on the mailbox.  My own WIFI will be installed on Tuesday. The cat is another problem.  I am also having to figure out her problems.  Ugh.  And, I am not that good at cat problems.  Ugh.

The good news – I am here. In Paris, where I have wanted to be since my second year of college at the University of Wisconsin.  I was 19.  I am in the arrondissement (6th) that I wanted to be in and did not think I could afford.  And, I am still young enough to realize where I am and what is happening with some good years ahead of me.  I feel very blessed.  I am very glad to be gone from Nice.  It was not good for me.  Beauty alone is not enough.  For me, anyway. I need the energy of a city to keep me vital and “trying to figure things out”.  Believe it or not, I feel younger here.  I have energy.  I have enthusiasm.  I said to a friend over lunch today that “the day I stop trying to figure things out is the day I will have given up.”  I hope that doesn’t happen for a good while yet.  As Mama Dorough would say “just keep waking up.  Just keep breathing.  Just keep trying to figure things out. I have a story.  We all do.  Will our stories will go untold?  Will my children ever know my story?  Or care? I doubt it.  I don’t know Mother’s story.  I don’t know Daddy’s story.  I know some things, but I don’t know their story.  I am still thinking about that one.

Meanwhile, in another part of the forest, I try to avoid political posts, but I don’t always succeed. I am sure you know that by now. Especially since I was an avid plaintiff’s Employment Law attorney for 20 years before I retired. But my passion is working overtime right now. When I read this opinion, it says what is in my heart. My way of figuring this out. I am not sure who wrote it or where. I just researched it – a writer for NPR news in Boston WBUR, name is Steve Almond. Thanks to the author.  To those I am offending, I don’t apologize. It all goes to character. I know that Daddy would agree.  I don’t know about Mother

“By the time you read this, the Senate will have acquitted President Trump of the articles of impeachment lodged against him, with only one GOP senator, Mitt Romney, voting to convict.

We’ve known this result was coming for weeks, and known, too, that the defendant was guilty. House managers presented overwhelming evidence that Trump sought to extort Ukraine, a vulnerable ally, to smear Joe Biden, and thus cheat in the 2020 election, that he used his office, and taxpayer money, to do so, then obstructed the investigation into this scheme.

As is so often the case with this president, he not only confessed to these crimes, he bragged about committing them in public.    … the only way to battle nihilism, which is the belief in nothing, is with belief in something.

A number of Republican “jurors” admitted that the House proved its case. Their rationale was not that the president was innocent, but that his guilt didn’t matter.  And that, in a nutshell, is the most upsetting aspect of this regime — the prevailing attitude that nothing matters: that every act of corruption, every lie, every calculated cruelty, every indecent remark, can be excused, rationalized, shrugged off.  He brags about sexually assaulting women and mocks the disabled? He incites violence among his supporters? He demonizes immigrants and allies and cuddles up to white supremacists and dictators? He rips families apart at the border, and has kids put in cages? He calls climate change a hoax and empowers polluters? He nakedly profits off his presidency?  Who cares?

The crisis we now face is not just that the leader of our nation does these things, but that so few within his party will hold him accountable.  The 2016 election revealed that our electoral system was sufficiently flawed (see: the Electoral College, voter suppression, foreign interference), that our population was sufficiently apathetic and aggrieved, and that our fourth estate was sufficiently profit-driven, to allow a brazenly corrupt demagogue to claim the White House.  The ensuing years have accelerated the degradation of our collective moral standards, the ways in which our media and political classes have either ignored, or normalized, the ruinous policies and propaganda and illegal conduct of an administration that functions, openly, as part of a transnational crime syndicate.

It is this monstrous nihilism that yanks me awake in the middle of the night.  And we have just witnessed, in real-time, the logical endpoint of that nihilism: the public desecration of our Constitution, by Trump and his minions. Mitch McConnell just handed a power-drunk bully the keys to the liquor cabinet. He knows he did it. He doesn’t care.

We should be honest about what just happened, what we’re living through, and we should be alarmed and saddened. But we should also recognize that historical moments such as these can be clarifying.

Here’s what I can see, more clearly now than ever: The only remaining source of accountability is the power of our own faith.  Faith may sound like an old-fashioned word, but the only way to battle nihilism, which is the belief in nothing, is with belief in something. This is what Adam Schiff meant when he declared, in his soaring and doomed final argument that he placed his faith “in the optimism of the founders.”

I would go a step further. In this climate of calculated cynicism — a cynicism designed to make us feel hopeless — we need to be fanatical in our optimism, in our belief that we can become the subjects of history again, not just the objects.  We need only look at the history of this country to see the proof of this fanatical optimism. Abolition. Suffrage. The labor movement. The New Deal. The War on Poverty. Civil Rights. In each case, the outcome seemed impossible. And yet millions of Americans rose up and took action to make our union more perfect.

It’s not enough at this point for us to wait around for others — the courts or suburban women or millennials or the media or Susan Collins — to come to our rescue. We have to come to our own rescue.  To do so, we must place our faith in the fragile belief that our own individual actions as citizens still matter. We have to shake off the modern American temptation to passively consume civic dysfunction as disposable entertainment.  Nihilism remains the GOP’s ultimate Trump card. They are counting on citizens of good faith to give up, to quit the field, to say “who cares?”

The media may continue to train its cameras on the trollish spectacles Trump orchestrates at his rallies, and his various reality TV events, such as last night’s State of the Union address. But we, as citizens, don’t have to hate-watch.  We have to accept our anguish and set our devices down and find ways to support the candidates and causes we hold dear. We must organize rather than agonize.  This optimism should not be confused with naiveté. We all know that the Trump regime will do everything in its power to rig the 2020 election. We’ll see more voter suppression, more fearmongering, more Russian trolling.  Nihilism remains the GOP’s ultimate Trump card. The counting on citizens of good faith to give up, to quit the field, to say “who cares?” So is the party’s most reliable ally, Vladimir Putin. And so are the oligarchs, domestic and foreign, who have converted our planet into a vast and decaying casino.

Don’t let them sucker you. Be a fanatical optimist. Make a plan. Take action. Listen to your conscience. Vote. A Brighter dawn might await all of us, but we have to work for it.”

Best, JAY (“Rough Seas Make Good Sailors!) (I have not taken any pictures of me lately.  So you will have to live with used one.  And, I don’t feel like smiling right now.) 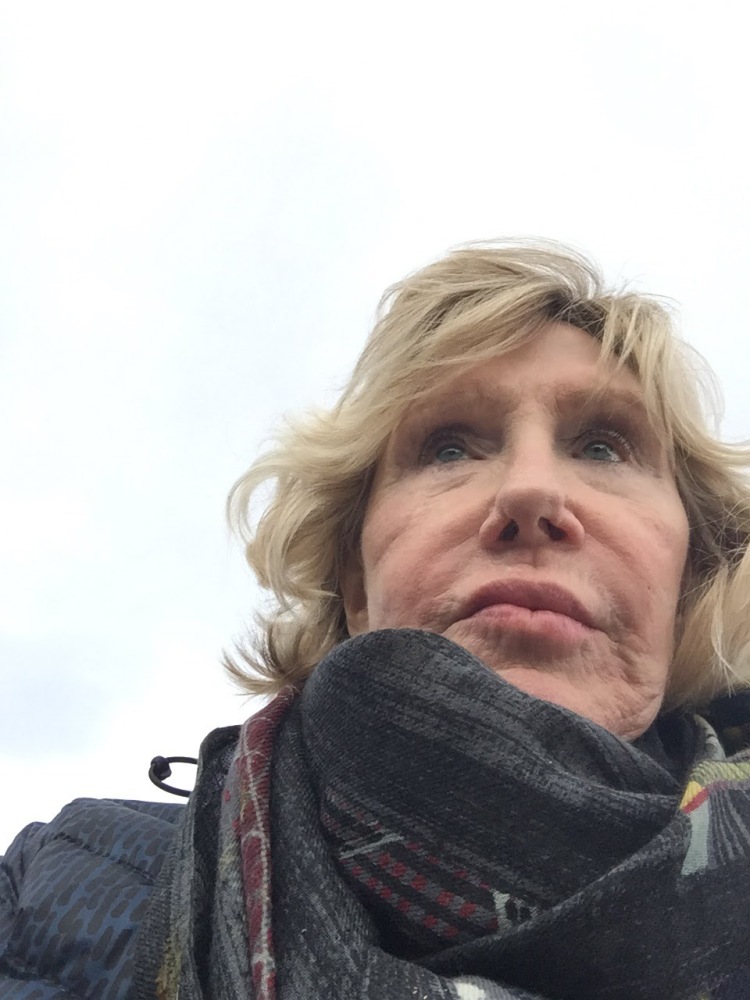